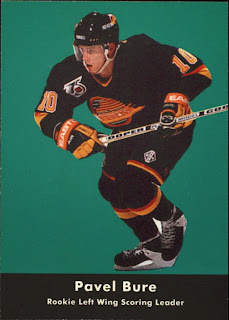 
Interestingly, Bure switched to number 96 for the 1995-96 and 1996-97 seasons. Esa Tikkanen wore number 10 for parts of those two years. Tikkanen was traded to the Canucks shortly into to the 1995-96 season and was then shipped to the New York Rangers near the end of the 1996-97 season. Pavel is the only one of the four players to have a spot in the Hockey Hall of Fame, inducted in 2012.


Test and expand your hockey trivia knowledge with these four questions regarding the retired jersey numbers of the Vancouver Canucks, etc.


Q. Number 12 is retired by the Canucks in honour of what player?


An Alberta boy, Smyl played his junior hockey in the Vancouver area for the New Westminster Bruins. He was team captain and Memorial Cup champion with the Bruins in his final two years, 1976-77 and 1977-78. Stan then stayed in the area after retiring as a player and is still with the Canucks organization today.


Q. What two numbers have been taken out of circulation in honour of fallen hockey heroes that left too soon?


A. Number 11 was worn by Wayne Maki, a Canuck from 1970 to 1973. Maki died of brain cancer in 1974. The number 11 has since been worn by one other Vancouver player, Mark Messier. During the summer after his first partial season with the Canucks, Luc Bourdon succumbed to injuries resulting from a motorcycle accident. Bourdon’s number 28 has since been taken out of circulation. There is a third number, 99, that has been taken out of circulation by every team in the NHL in honour of Wayne Gretzky.


Q. Number 16 is retired in honour of what long time Canuck?


A. Trevor Linden played nineteen seasons in the NHL, the majority in a Canucks jersey. Linden began his career with Vancouver in 1988-89 after being the second overall pick in the 1988 NHL Entry Draft, behind just Mike Modano who was selected by the Minnesota North Stars. Along the way, Linden played for the New York Islanders, Montreal Canadiens and Washington Capitals before returning to Vancouver to finish out his NHL career. Number 16 was retired in December of 2008.


Interestingly, like Smyl, Linden is an Alberta boy and like Smyl, Trevor won consecutive Memorial Cup championships. However, it was with a team in Alberta, the Medicine Hat Tigers.


Q. Before Pavel Bure, who was the most recent Vancouver player to have his number retired by the club?


A. Number 19 belonging to Markus Naslund was retired in December, 2010. Naslund was originally the 16th overall pick of the Pittsburgh Penguins in the 1991 NHL Entry Draft. Markus played with Vancouver from 1995-96 to 2007-08. He played one more season in the NHL with the New York Rangers before retiring.


He was the Ted Lindsay Award winner in 2002-03. Perhaps the truer measure of the league's MVP over the Hart Trophy, simply because it's an award selected by the players. That year, Naslund finished second in goal scoring with 48, behind Milan Hejduk of the Colorado Avalanche. Markus finished two points behind Peter Forsberg of the Avalanche in the race for the Art Ross Trophy with 104 points.


When Naslund went to the Rangers, he wore number 91. At the time Scott Gomez was wearing 19 for New York and Markus lost the battle for the number.