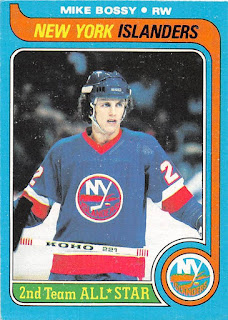 The 1979-80 O-Pee-Chee hockey card series is forever known as the set that includes the Wayne Gretzky rookie card. Although not the most valuable hockey card in the history of the hobby, considering when it was produced and in what great numbers, the Gretzky card, at $800, is one of the most coveted treasures among collectors.


The complete set of 396 1979-80 O-Pee-Chee hockey cards is valued at around $1400. Just what cards other than the Gretzky rookie card account for the rest of the set’s value? It turns out, there is nothing enormously outstanding but still there are some important cards.

Card number 185 belonged to another NHL legend in his final season. Bobby Hull of the Winnipeg Jets is valued at $25 on cardboard. Just like the Gordie Howe rookie card, the 1958-59 Topps Bobby Hull rookie card is also valued at $3000. Interestingly, the Topps version of the 1979-80 Bobby Hull card shows him as a member of the Chicago Black Hawks. In the end, Hull split his final season in the National Hockey League with the Jets and Hartford Whalers.

Mike Bossy’s great NHL career was just blossoming in 1979-80, only to be overshadowed by the accomplishments of Gretzky. The New York Islanders sniper was featured on card number 230. The card is valued at $20. 1979-80 was the third of Bossy’s ten seasons in the NHL. His career was cut short due to injury and he left the game surpassing the 50 goal plateau in every season but his last. 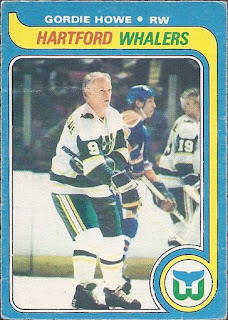 The next highest rated rookie card from the 1979-80 O-Pee-Chee series, behind Gretzky’s, is one for the trivia books. Believe it or not, the Barry Melrose rookie card, number 386, is valued at $10, $4 more than the next most valuable rookie. Melrose had played 178 games in the World Hockey Association with the Cincinnati Stingers over the three previous seasons. He came to the NHL with the Winnipeg Jets and played a total of 300 regular season NHL games between 1979-80 and 1985-86 with the Jets, Toronto Maple Leafs and Detroit Red Wings.

Posted by Tom Samworth at 8:25 PM No comments: