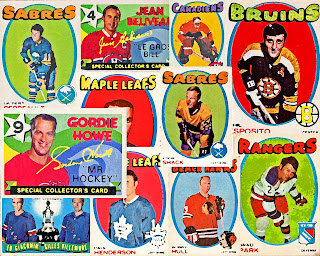 The 'Virtual Hockey Card Collection' has been a massive undertaking at Vintage Hockey Cards
Report and completion is still off in the distance. In fact, completion may never happen. Oh, we do plan to have every card from 1951-52 Parkhurst to 1979-80 O-Pee-Chee posted in the collection (maybe by the end of 2016). But then, it's onward to pre-Parkhurst sets, minor league sets, European sets, etc., etc., etc.

A fun thing we've added to the site and we're doing for every completed set are slideshow videos. The set videos feature all cards in numeric order, blended with some nice background music.

The videos are hosted on YouTube and can be accessed by the links below. If you want to play them all, click on the playlist below the links. Some would find it mind-numbing and boring but, if you're visiting this site, chances are this would be something that would make a great time-waster while trying to push your way through the long work day!

The title image 'art' you see with each video (like the one shown in this article) is getting more and more elaborate as we move forward. If any of the images interest you, throw a comment on this article or email tom@vintagehockeycardsreport.com and we'll send you the full size file - free of charge. For the image above, featuring the highlights of the 1971-72 O-Pee-Chee set, you should be able to just click on the image to get the full size file - then just right click and 'save image as'...

Posted by Tom Samworth at 7:48 AM No comments: 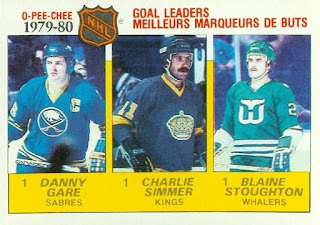 1979-80 was the first year of the WHA expansion in the National Hockey League. When the World Hockey Association ceased operations after the 1978-79 season, the Edmonton Oilers, Winnipeg Jets, Hartford Whalers and Quebec Nordiques joined the NHL with depleted rosters.


It was the first year since Phil Esposito scored 55 goals in 1972-73 that the league leader finished the season with less than 60. It also marked the only time in NHL history that three players tied for the goal scoring lead, all with 56.

Today, the Rocket Richard Trophy is awarded to the player in the NHL with the most goals during the regular season. Previous to 1998-99, the goal scoring leader was not honoured with any hardware. In 1979-80, the Rocket Richard Trophy would have went to Charlie Simmer of the Los Angeles Kings. Although there were three tied atop the NHL, Simmer scored his 56 in just 64 games.


Playing on the Triple Crown Line with the great Marcel Dionne and Dave Taylor helped Simmer reach the same goal total in the following season. These were the only two 50 goal seasons in Simmer’s injury hampered career. Between 1974-75 and 1987-88 played just 712 of a possible 1,200 regular season games and scored 342 goals. Simmer was originally drafted by the California Seals. Although with the Seals and Kings, Charlie also played for the Cleveland Barons, Boston Bruins and Pittsburgh Penguins during his career.

Danny Gare of the Buffalo Sabres scored his 56 goals in 76 games. It was the second of two times that Gare would reach the 50 goal plateau over his 13 year NHL career, scoring exactly 50 for the Sabres in 1975-76. Danny finished his career with 354 goals in 827 regular season games. He was a second round pick of the Sabres in 1974 and also played for the Detroit Red Wings and Edmonton Oilers.

Blaine Stoughton played the full 80 schedule for the Hartford Whalers in 1979-80. It was his first of two 50 goal seasons, scoring 52 for the Whalers in 1981-82. Stoughton was originally the seventh overall pick at the 1973 NHL Amateur Draft by the Pittsburgh Penguins. He played just 34 of 526 NHL games with the Penguins.


Blaine played major league pro hockey from 1973-74 to 1983-84. In the NHL, he played for the Penguins, Toronto Maple Leafs, Whaler and New York Rangers. Stoughton had a three year stint in the WHA from 1976-77 to 1978-79, playing for the Cincinnati Stingers, Indianapolis Racers and New England Whalers. Blaine scored 52 goals for the Stingers in his first year in the World Hockey Association.
Posted by Tom Samworth at 7:43 PM No comments: 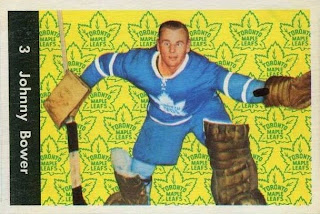 Les Douglas won the Cunningham Award in 1949-50. With 32 goals and 68 assists for 100 points in 67 games, Douglas was also the recipient of the John B. Sollenberger Trophy as the player in the AHL with the highest point total during the regular season.


Douglas played in the American Hockey League from 1939-40 to 1950-51 with the Indianapolis Capitals, Buffalo Bisons and Cleveland. Between 1940-41 and 1946-47, Les played sporadically with the Detroit Red Wings of the National Hockey League, appearing in a total of 52 games.

Eddie Olson was the next Cleveland player to be honoured with the Les Cunningham Award. Olson took the prize in 1952-53 and, like Les Douglas, also won the Sollenberger Trophy. In 61 games, he scored 32 and added 54 assists for 86 points to lead the league. The Barons were Calder Cup champions that season.


Olson played in the AHL from 1946-47 to 1954-55 with the St. Louis Flyers and the Barons. Eddie never appeared in a National Hockey League game.

Johnny Bower is one of just two players to win the Les Cunningham Award three times. Just one of the three came as a member of the Cleveland Barons with the other two being awarded while he was with the Reds in Providence, Rhode Island. Bower won the Cunningham with Cleveland in 1957-58. He played in 64 of the team’s 68 regular season games, posting two shutouts and a 2.19 goals against average.


Bower had played his last game in the AHL with the Barons at the end of that season. The following year, he became a regular goaltender with the NHL’s Toronto Maple Leafs, a job he would retain until retiring from the game during the 1969-70 season. Johnny was a charter member of the AHL Hall of Fame and is also enshrined in the Hockey Hall of Fame.

Besides Bower, Fred Glover is the only other player to win the Les Cunningham Award three times. All of Glover’s victories came while playing for the Cleveland Barons. Fred won the award in 1959-60, 1961-62 and 1963-64. In 1959-60, Glover also won the second of his two John B. Sollenberger Trophies.

Posted by Tom Samworth at 7:34 AM No comments: